I haven’t been blogging this summer, as I’ve been writing my new TSoY book. It’s the largest book I’ve ever written (though not the largest I’ve designed), although I did have some help in the form of prior art by Clinton and Josh and other TSoY enthusiasts who allowed me to use their work. Very, very much work, I haven’t pushed this hard since -05.

I deliberated on the name of the book for quite a while, and ultimately ended up calling it The World of Near. The issue here was that I didn’t want to use the same name Clinton had used for his own book, but I wanted to make it clear that this was a TSoY sourcebook. “TSoY” is still on the cover as a sort of brand logo, but the actual name of the book is different. I never cared much about the rpg (and textbook) industry practice of publishing new editions of the same book even where the creators, intent and structure of the work were completely reworked. 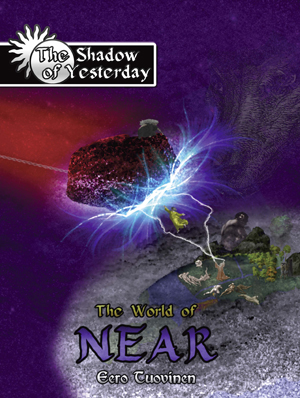 Contents of the Book

This is a 196 page letter-size monster. Going to retail for 25 monies, I think, with Solar System included in the deal. The topic is essentially “everything I know about the world of Near, as established in forum deliberatives and play over the last five years”. I almost made that a subtitle, even. Check out the table of contents:

1st Movement: The Shorter Near

4th Movement: Species of Near

Old TSoY players can probably see that the book basically consists of all the old material and various stuff from the forums and my own notes. There’s a hellish amount of material in each of those chapters; fluff is very similar to what it used to be, but the crunch has been reworked and twisted and expanded in various ways. I tried to put everything I have on the topic into the book, I’ll be surprised if I start feeling like I need to do anything with the setting for a while after this.

As far as book design goes, the book resembles the Solar System booklet a lot, they’re sister products. We honed the page models and expression to fit the new text, but the typography and paradigm are pretty much the same. The new text doesn’t do boxed texts, which is an improvement; I haven’t been entirely happy with the layout compromises in the SS booklet. It’s a very text-heavy book, with no art for art’s sake. Planned into a reference to be used in play.

Now I’ll just need to, let’s see: pack for Gencon, prepare a couple of lectures for Ropecon (“Lumpley Principle” and “Diplomacy 50th Anniversary” to be exact), get a haircut, write some announcements of the new product so you people know to buy it and update the company website so you can buy it. And I need to do all that today, because tomorrow it’s time for Ropecon, the primary Finnish rpg convention, after which I’ll be remaining in Helsinki in anticipation of Gencon. Probably won’t get more than the first couple of things done, so I’ll update the webpage from Helsinki next week, I suppose. That’s when we’ll start taking orders for the book, too; I’ll bring some from Gencon for the European audience, we should be able to start mailing them around the 20th.